The Fourth of July means fireworks across America and that can mean thousands of injuries and trips to hospital emergency wards. 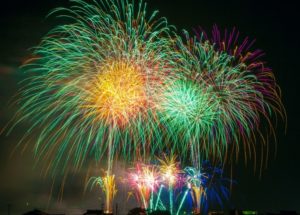 An estimated 7,600 of the total 11,000 fireworks-related injuries in 2016 were treated in hospital emergency departments during the period between June 18, 2016 and July 18, 2016, according to a report on 2016 by the Consumer Products Safety Commission and its National Electronic Injury Surveillance System.

CPSC Chairman Elliot F. Kaye held a press conference this week to bring attention to the dangers of fireworks especially for children and debut a video dramatizing the dangers of various popular fireworks including sprinklers and bottle rockets when they are misused.

“You have to keep fireworks, especially sparklers, away from kids,” Kaye said. He said sparklers burn as hot as a blowtorch.

New York Giants professional football player Jason Pierre-Paul has filmed a public service announcement with CPSC in which he talks about the fireworks injury that blew off much of his hand in 2015. “Leave fireworks to the fireworks professionals,” Pierre Paul says in the video.

Kaye noted that even a professional athlete like Pierre-Paul does not have the reflexes to avoid injury.

In 2016, fireworks caused four deaths. CPSC reported that three of the four fatalities were related to reloadable aerial devices and one was associated with manufacturing homemade devices:
•On May 15, 2016, a 38-year-old male from Arizona was fatally injured in the garage of his single-family home while apparently attempting to manufacture fireworks. In the victim’s home, investigators found a large quantity of fireworks and firework manufacturing components, which had been purchased on-line from an out-of-state supplier.
•On July 4, 2016, a 42-year-old male from Florida suffered fatal injuries when the fireworks device he was lighting malfunctioned. The victim was trying to set off large mortar-type fireworks in a PVC pipe that was anchored to the ground.
•A 27-year-old male from Georgia died shortly after the new year of 2016 from a fatal fireworks accident. According to the witnesses at the scene, the victim accidentally placed a firework in a tube upside-down and then lifted the tube above his head. The firework exploded from the bottom and struck the victim in the neck.
•On July 5, 2016, a 26-year-old male from Kansas fell off the roof of his home after a mortar type of fireworks device exploded in his hand near his chest. According to the witnesses, the victim was on his roof shooting firearms and the explosion knocked the victim backwards off the roof.

The people who sell fireworks, the American Pyrotechnics Association, report that while sales of fireworks in the U.S. rose from 29 million pounds in 1976 to over 268.4 million pounds in 2016, fireworks injuries have declined. The injury rate was almost 43 percent lower in 2016 compared to 2000, the group says. In 2016, the injury rate per 100,000 pound of fireworks consumed was 4.1. The APA credits industry safety education efforts and better quality products. The APA also says that over the past decade, injuries have gone down even as states and municipalities have relaxed their fireworks laws to permit more types of fireworks to be sold. There are only three states that still prohibit the sale of all consumer fireworks: Delaware, Massachusetts and New Jersey.

“Serious misuse of fireworks devices, as well as the use of illegal explosives, account for a large proportion of these fireworks-related injuries,” says the APA, which adds that fireworks industry has stepped up its public safety education efforts.

The group also notes that fireworks are not the leading cause of consumer injuries; close to 20,000 people are injured every year by barbecue grills and more than 120,000 by baseballs.

One of the dangers is that sometimes fireworks don’t go off as expected.

Michelle Pantoya, a professor in the Department of Mechanical Engineering at Texas Tech University, has studied duds, that is fireworks that don’t fire after they are lit, and says they can be dangerous.

There are many reasons a firework might fail; if it happens, she warns against relighting it.

“My suggestion is just not handle duds because you never know if there’s still enough of an ember burning somewhere that you can’t see that could ignite it when you’re actually going to touch it,” says Pantoya.

She also warns against using old fireworks. That’s because most “off the shelf” fireworks are good for about a year.

She recommends having sand and water on hand if fireworks will be part Fourth of July family festivities.

“Even small embers, little sparks, are trajectories from some of these fireworks (and) could easily start even just a local fire in your backyard,” said Pantoya.